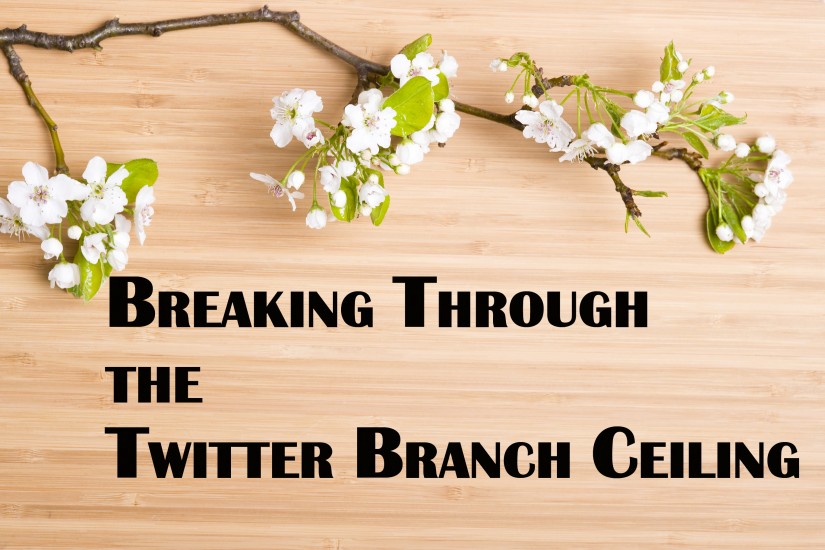 When you are new to Twitter, much of the fun is figuring it all out, finding cool people to follow and joining interesting tribes. Whether you started by following friends, or used some tools to find people of interest, there is often a whirlwind of activity when getting your account off the ground.

If, like many of us, you really liked Twitter, you probably found the number of people you followed, growing daily. While you may have been keeping an eye on how many followed you back, it probably wasn’t that important to you, especially when you were first getting started.

Then one day you see someone you want to follow, click on the little icon under their image and get that dreaded message that you are not able to add any more followers at this time. A quick look at the stats in your sidebar will probably tell you why – you are following 2000 people; you have hit the twitter following limit – ‘twitter branch ceiling’.

When I first hit the ‘twitter branch ceiling’ I just un-followed a few people that I really didn’t need to hear from. While I am careful to only follow those that tweet info of value, I do notice that sometimes after following for a while some of them just recycle a few key posts. They were the first to go and that freed up a few slots, which I quickly filled with new people to follow. At which time I bumped up against the twitter following limit ‘ceiling’ again.

After a few more rounds of minor un-follow efforts, I was still getting the message almost daily. It was frustrating and I didn’t know what to do!

First I read the official Twitter posts about this issue. They were no no-sense posts explaining that they were trying to preserve the Twitter experience by making sure that people were not too aggressively following and to be honest, I knew they had a point. If you are just spamming, people won’t follow you – this did kind of weed out the bad apples. But there were plenty of people out there with zillions of followers, and many of them were even spammers – I knew this limit could be passed. I really liked this new tool and was determined to figure this out and to ‘break through’.

Now, at this point, I am sure that there are those of you out there that are thinking, ‘why does anyone need to follow more than 2000 people?’ And that is true. Depending on your goals and how you are using Twitter, you may never even hit this limit. Or you may hit it and think, ‘OK, I will just nurture the tribe I have’.

I use Twitter to network with people and to gather information. I use it to meet potential partners and clients and to fill my online webinars. I also follow and correspond with a large variety of Twitter users for the express purpose of watching how different people use their accounts and for case studies – both positive and negative – that I use when teaching. For me, the more connections I can make, the better. There were clearly more people on Twitter that I was interested in following, and many more that might be interested in my posts and services so I embarked on a mission to grow my tribe.

The Twitter guidelines clearly state that they want you to have a good ratio between those you follow and your followers but were vague about the exact numbers. Seasoned Twitter users talked about @replies and mentions. Articles I read gave obscure ratios based on the year you joined and others had no clue. A few mentioned 10% as the goal – following no more than 10% of the number that were following you. That seemed like a reasonable goal and I set it as my own.

At the time I hit 2000, I had about 1600 people following me. My first task was to get my account into a better balance by UN-following a large number of people. I had been un-following anyone in my tweet stream that posted anything even marginally SPAMMY but I had quickly re-filled those spots.

Next, using Friend or Follow (friendorfollow.com) I was able to see who I was following that was not following me back – key information I needed as I tried to get my account back in balance.

Going through the list they compiled for me, I was quickly able to un-follow over 50 people that hadn’t posted in months. Then there were the obvious spammers and the accounts that now, upon closer scrutiny were no longer of value – especially since they were throwing off my balance!

Then came the hard part. Accounts like Bill Gates and Inc5000, Guy Kawasaki and Mashable were on the list of people that were not following me back. These were people and accounts I truly respected and wanted to continue to follow. Many of them only followed a minuscule number of people even though they had hundreds of thousands of followers so it was unlikely that my pithy and educational posts were going to convert them to followers any time soon. (Needless to say that they had probably sailed right through the ‘Twitter branch ceiling’) For that group, I created a Twitter ‘list’ called “Didn’t follow back” and moved all of them there. This way, I could still quickly see them when I wanted to but they no longer used up a valuable ‘follow’ slot.

And the rest, I went through and relentlessly un-followed. In the end, I got my following list back down to about 1500. It was a major purge that was certainly valuable.

Over the next few months I built up my following, always being careful to not get too far ahead of my number of followers. By the time I went to follow my 2001st account, I was had well over 1800 followers and no problem!

So, the lessons of this mini case study are:

I do hope that you found this valuable, that you will check out my tweets at @LisaMarieDias and that you will, hopefully, find me follow (or at least ‘list’) worthy!